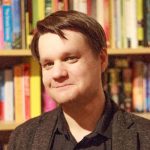 In the not too distant future, UX Practitioners the world over are celebrating! All indications are that designing for 2D screens has reached a digital summit. Every journey, gesture and interaction users could possibly require has already been designed, described and defined. Dark patterns are eradicated. Site navigation affords instant wayfinding. IAs and UX Designers raise a glass to toast their collective awesomeness.

Meanwhile, a new paradigm has emerged. Virtual, Augmented and Mixed Reality have crossed the streams between meat-world and cyber-space. Once thought to only be “for games”, these fledgling environments have also become home to more traditional content formats and birthed a plethora of exciting new digital spaces for our audience to inhabit. With this comes an unintentionally architected Wild West of interaction patterns that play out across 6 degrees of freedom in three dimensions. Users everywhere feel confused, desperate and even physically sick as they struggle to comprehend yet another unfamiliar interface domain.

Thankfully, it doesn’t have to be this way. We can bring order to the chaos. Through considered categorisation, we can start to map the Cross-Reality spectrum and make sense of its strengths – as well the challenges that still remain. Perhaps by taking the time to describe xR UX, we’ll reach a new high in delighting users with meaningful experiences.

So join me as I introduce a high-level taxonomy of Cross-Reality UX patterns, along with a framework to help decide which interactions make sense based on the story you’re trying to tell. Hopefully you’ll be empowered to join the fight, and just maybe we’ll start to demystify this new and exciting realm of user experience.

Rob Scott is a User Experience Architect for BBC Design + Engineering, currently working on UX&D’s Spatial Immersive Design team exploring how 2D digital designers transition to thinking and working spatially. Before this, he worked within BBC Education on products like BBC Food and BBC Bitesize, and spent time working on the‘Global Experience Language’. Prior to the BBC, he spent 7 years with a niche provider of meaningful travel experiences, constructing the IA for CRMs, flight booking and event management systems. He also co-organizes the VR Manchester Meetup and will talk about the difference between ‘presence’ and ‘immersion’ for hours if you let him.